Your browser does not support JavaScript!
Menu
Home Community About Project Clean Lake

Project Clean Lake is a 25-year program that will reduce pollution in Lake Erie by 4 billion gallons per year. A combination of large tunnels, treatment plant improvements and expansion, and green infrastructure is reducing the volume of combined sewer overflow discharging to our Great Lake.

Project Clean Lake at a glance: History and overview

Clean water work and an agreement to do more

In 1972, the Clean Water Act was created to address water quality issues, like raw sewage discharges. These are commonly due to the now outdated design of combined sewer systems, large sewers designed to capture both sewage and stormwater in the same pipe for treatment. Heavy rains and large volumes of surface runoff contribute to higher flow in the sewers that systems can not handle; the result is discharges of the combined sewage to the environment known as combined sewer overflows. Although we reduced raw sewage discharges significantly between 1972 and the 1990s and hold permits to manage sewer overflows within the combined sewer network, the EPA considered us in violation of the Clean Water Act because not all discharges were controlled to required levels. The Sewer District and the Federal government entered into an agreement, a Consent Decree, to address this issue.

A decree is a legally binding commitment.

The Consent Decree is a legally binding agreement between the Sewer District, the Department of Justice, U.S. Environmental Protection Agency, Ohio Environmental Protection Agency, and the Ohio Attorney General’s Office. The document details what we call Project Clean Lake, a 25-year program that will reduce the total volume of raw sewage discharges from 4.5 billion gallons to 494 million gallons annually. Over 98% of wet weather flows in our combined sewer system will be captured and treated when the program is complete in 2036.

Grey and green at the heart of Project Clean Lake 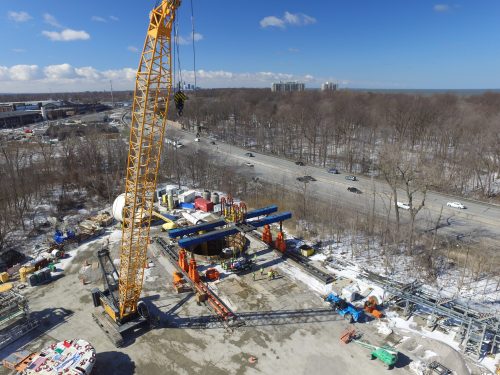 At the heart of Project Clean Lake is the construction of large-scale storage tunnels and treatment plant enhancements. We will construct seven tunnels, ranging from two to five miles in length, up to 300 feet underground and up to 24 feet in diameter, large enough to park a semi truck. At all three of our plants, we are increasing treatment capacities, and we have piloted lower-energy treatment technology that would allow us to avoid more costly, energy-intensive processes.

The program also includes significant green infrastructure investment such as stormwater control measures to store, infiltrate, and evapotranspirate stormwater before it even makes its way to the combined sewer system. This could reduce the long-term cost of the program while enhancing neighborhoods, providing economic development opportunities, and rebuilding our community.

The consent decree, a legal agreement between the US EPA, DOJ, State of Ohio, and the Sewer District outlining the plan to reduce combined sewer overflows, was initially approved by the Sewer District Board of Trustees in December 2010 and became official in July 2011.

Out of 82 planned projects, 72 are completed or active as of January 2023, including:

To date, the work completed under the consent decree has led to elimination of about 1.7 billion gallons of overflow from discharging into the environment each year with the reduction of another 300 million by the end of 2023.

We have spent or awarded more than $1.9 billion to date while saving nearly $500 million through value engineering.