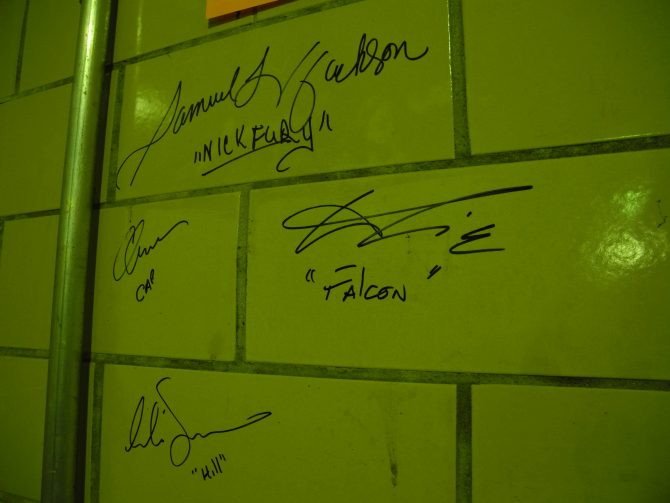 Actors Samuel L. Jackson, Chris Evans, Anthony Mackie, and Cobie Smulders—stars of “Captain America: The Winter Soldier”—signed a wall in one of the Northeast Ohio Regional Sewer District facilities where they filmed several scenes for the movie in 2012.

Hollywood and the stars of “Captain America: The Winter Soldier” left their mark in Cleveland in 2012. At our facilities, they left their marks right on the walls.

Yes, two Northeast Ohio Regional Sewer District facilities served as shooting locations in May of 2012 for Marvel’s Captain America: The Winter Soldier. Those locations included a series of tunnels under our Southerly plant in Cuyahoga Heights, and Lakeview Cemetery Dam in Cleveland. When filming concluded at each location, the actors signed two walls where the scenes took place.

“It was an amazing opportunity for us,” said Manager of Community and Media Relations Jean Chapman. “We were able to accommodate the shoot without impacting our services.”

Local media reported that the Sewer District might have been one of several Cleveland shooting locations for crews and stars last summer, but we could not confirm that fact based on our agreement with the production company. Jean said the company was very grateful for the accommodations we offered, and it was a reflection of the welcoming reception they received from Cleveland overall.

In gratitude for allowing crews to film on our locations, producers made a donation to the Cleveland Foodbank, a partner our employees have supported in previous fundraising campaigns.

While shooting in downtown Cleveland took center stage last summer, many onlookers wondered where stars like Samuel L. Jackson and Chris Evans were while stunt doubles received most of the camera time. The signatures in our photos reveal where they might have been.

VIDEO: Watch how a toilet works in outer space....