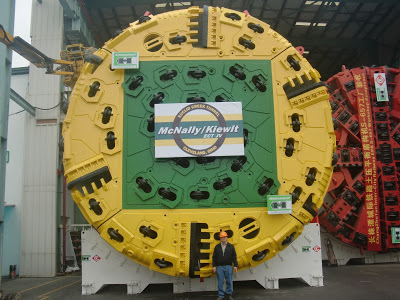 The cutterhead for Ohio’s largest tunnel boring machine, named “Mackenzie,” will begin its descent into Shaft 1 of the Northeast Ohio Regional Sewer District’s Euclid Creek Tunnel on Friday, June 1. That morning, public officials and local media professionals will visit the Sewer District’s construction site in Bratenahl for an up-close and personal look at this impressive piece of machinery.

We will post photos of the equipment and crowd before Mackenzie enters the access shaft. We also will cover the event as the 300,000 pound cutter head is lifted by a crane and lowered 200 feet underground. Mackenzie will not be seen aboveground again until 2014 when nearly three miles of the Euclid Creek Tunnel is mined and she emerges near the intersection of Nottingham Road and St. Clair Avenue.

The Euclid Creek Tunnel is the first in a series of storage tunnels being constructed as a part of Project Clean Lake, the Sewer District’s 25-year, $3 billion program to drastically reduce the amount of combined sewage entering local waterways annually.

About the Euclid Creek Tunnel

The Euclid Creek Tunnel will start in Bratenahl, south of Interstate 90, and continue northeast to the District’s Easterly Wastewater Treatment Plant. There, the tunnel will continue under Lake Erie for about 3000 feet and pass under the shoreline near Green Creek at East 152nd Street. The tunnel will then head east, following Lake Shore Boulevard and Nottingham Road, and end at St. Clair Avenue.

Greater Cleveland’s earliest sewers (primarily within the City and its inner-ring suburbs) are combined sewers. Built around the turn of the 19th century, these sewers carry sewage, industrial waste, and stormwater in a single pipe. During heavy rains, there is a dramatic increase of water flowing through the combined sewers. When this happens, control devices may allow some of the combined wastewater and stormwater to overflow into area waterways—such as Lake Erie and Euclid Creek—to prevent urban flooding. This event is called a combined sewer overflow, or CSO, and harms our clean-water environment.

CONSTRUCTION: Trenching work to begin along...

BY THE NUMBERS: Mackenzie's a machine that's...